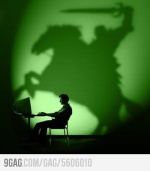 
A recent NASA report throws the space agency into conflict with it's climatologists after new NASA measurements prove that carbon dioxide acts as a coolant in Earth's atmosphere.
NASA's Langley Research Center has collated data proving that “greenhouse gases” actually block up to 95 percent of harmful solar rays from reaching our planet, thus reducing the heating impact of the sun. The data was collected by Sounding of the Atmosphere using Broadband Emission Radiometry, (or SABER). SABER monitors infrared emissions from Earth’s upper atmosphere, in particular from carbon dioxide (CO2) and nitric oxide (NO), two substances thought to be playing a key role in the energy balance of air above our planet’s surface.

NASA's Langley Research Center instruments show that the thermosphere not only received a whopping 26 billion kilowatt hours of energy from the sun during a recent burst of solar activity, but that in the upper atmospheric carbon dioxide and nitrous oxide molecules sent as much as 95% of that radiation straight back out into space.
The shock revelation starkly contradicts the core proposition of the so-called greenhouse gas theory which claims that more CO2 means more warming for our planet. However, this compelling new NASA data disproves that notion and is a huge embarrassment for NASA's chief climatologist, Dr James Hansen and his team over at NASA's GISS.
Already, the International Panel on Climate Change (IPCC) has been in full retreat after having to concede a 17-year stall in global warming despite levels of atmopheric CO2 rising almost 40 percent in recent decades. The new SABER data now forms part of a real world double whammy against climatologists' computer models that have always been programmed to show CO2 as a warming gas.

The SABER evidence also makes a mockery of the statement on the NASA GISS website (by Hansen underling Gavin Schmidt) claiming, "the greenhouse effect keeps the planet much warmer than it would be otherwise." [1]

As NASA's SABER team at Langley admits:
"This is a new frontier in the sun-Earth connection," says associate principal investigator Martin Mlynczak, "and the data we’re collecting are unprecedented."
Over at Principia Scientific International (PSI) greenhouse gas effect (GHE) critic, Alan Siddons is hailing the findings. Siddons and his colleagues have been winning support from hundreds of independent scientists for their GHE studies carried out over the last seven years. PSI has proved that the numbers fed into computer models by Hansen and others were based on a faulty interpretation of the laws of thermodynamics. PSI also recently uncovered long overlooked evidence from the American Meteorological Society (AMS) that shows it was widely known the GHE was discredited prior to 1951. [2]
Pointedly, a much-trumpeted new book released this month by Rupert Darwall claims to help expose the back story of how the junk GHE theory was conveniently resuscitated in the 1980's by James Hansen and others to serve an environmental policy agenda at that time. [3]
As the SABER research report states:
A recent flurry of eruptions on the sun did more than spark pretty auroras around the poles. NASA-funded researchers say the solar storms of March 8th through 10th dumped enough energy in Earth’s upper atmosphere to power every residence in New York City for two years.
“This was the biggest dose of heat we’ve received from a solar storm since 2005,” says Martin Mlynczak of NASA Langley Research Center. “It was a big event, and shows how solar activity can directly affect our planet.”
As PSI's own space scientists have confirmed, as solar energy penetrates deeper into our atmosphere, even more of its energy will end up being sent straight back out to space, thus preventing it heating up the surface of our earth. The NASA Langley Research Center report agrees with PSI by admitting:
“Carbon dioxide and nitric oxide are natural thermostats,” explains James Russell of Hampton University, SABER’s principal investigator. “When the upper atmosphere (or ‘thermosphere’) heats up, these molecules try as hard as they can to shed that heat back into space.”
To those independent scientists and engineers at Principia Scientific International this is not news. The “natural thermostat” effect of CO2 has long been known by applied scientists and engineers how have exploited it's remarkable properties in the manufacturer of refrigerators and air conditioning systems. The fledgling independent science body has repeatedly shown in it's openly peer reviewed papers that atmospheric carbon dioxide does not cause global warming nor climate change.
Some diehard climate alarmists will still say that in the lower atmosphere the action of carbon dioxide is reversed, but there is no actual proof of this at all. PSI suggests it is time for the SABER team to have a word with James Hansen.

The lack of long and reliable time series of solar spectral irradiance (SSI) measurements makes an accurate quantiﬁcation of solar contributions to recent climate change difﬁcult.
Whereas earlier SSI observations and models provided a qualitatively consistent picture of the SSI variability, recent measurements by the SORCE satellite suggest a signiﬁcantly stronger variability in the ultraviolet (UV)spectral range and changes in the visible and near-infrared (NIR) bands in anti-phase with the solar cycle. A number of recent chemistry-climate model (CCM) simulations have shown that this might have signiﬁcant implications on the Earth’s atmosphere. Motivated by these results, we summarize here our current knowledge of SSI variability and its impact on Earth’s climate
….
1 Introduction
The question of whether – and to what extent – the Earth’s climate is inﬂuenced by solar variability remains central to the understanding of anthropogenic climate change. According to the 4th assessment report of the Intergovernmental Panel on Climate Change, solar variability represents about 8% of recent total net radiative anthropogenic forcing (Solomon et al., 2007). However, there is a large uncertainty in this ﬁgure because several aspects of solar forcing and the different mechanisms by which solar variability inﬂuences the Earth’s environment are still poorly understood(see e.g. Pap et al., 2004; Calisesi et al., 2007; Haigh, 2007;Gray et al., 2010; Lockwood, 2012, and references therein).
For these reasons, the quantiﬁcation of solar contribution to climate change remains incomplete. This is further highlighted by some of the most recent investigations of solar spectral irradiance (SSI) variations and estimates of their inﬂuence on the Earth’s atmosphere based on chemistryclimate model (CCM) simulations.
Regular space-based measurements of the solar irradiance started in 1978. The total solar irradiance (TSI), i.e. the spectrally integrated radiative power density of the Sun incident at the top of Earth’s atmosphere, has been monitored almost continuously and was found to vary on different time scales (Willson et al., 1981; Fr¨ohlich and Lean, 2004; Fr¨ohlich, 2009). Most noticeable is the ≈ 0.1 % modulation of TSI in phase with the 11-yr solar cycle. Changes 2-3 times 80 larger than this are observed on time scales shorter than few days. Measurements of SSI, however, are not continuous over the satellite era and until recently have concentrated on the ultraviolet (UV) radiation, because of the larger relative variability of SSI below 400nm